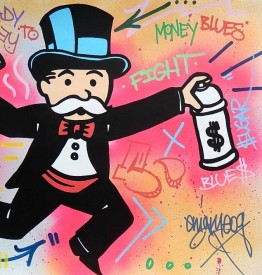 Former street artist ENIGME09 lives and works in Le Plessins-Robinson, a suburb of Paris. His real name is Cédric Marquise, born in 1979. He does not exhibit, sells work only via internet and prefers to work in silence. He is shy of publicity.

I buy works directly from Cédric. They are special, colourful and childish in a certain way. Someday I hope to get him to send a photo of himself.