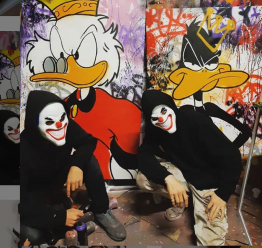 From their early years they felt great attraction for art in all its aspects, they began painting in the street, inspired by artists like Keith Haring, Basquiat, Picasso, or Dali, while to earn a living they continued practicing their art, in their own studio of tattoo.

With an eclectic style they paint, make sculptures and collage.

They usually participate in exhibitions and galleries in Barcelona, where they currently work, although their works have been sold in places such as Rome, Milan, Genoa, London, Manchester, Paris, Brussels, Polan, Berlin, Holland, United States, Canada, Mexico , Luxembourg, Portugal, Romania.